Netflix this week started the process of advertising their plans for 2021, that being that they have in their archives a movie a week first one was Pieces Of Me a drama, this second one is a sci-fi so thats where we start. 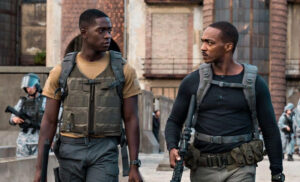 Outside the Wire is set in 2030 years after technology has made a leap to allow the US army to start using fully automated soldiers (called Gumps here) along with developments into fully AI android beings.

The movie follows a disgraced Lieutenant Harp (Damsen Idris) who after a disasterrous dissobeying of orders, rather than being jailed is reassigned to a warzone with the idea… if he survives… he is forgiven.

Being sent to this warzone, Harp is paired with Captain Leo an android officer (Anthony Mackie, marvel, after life) who is working on his own agenda to end the war…apparently.

The story follows the new pair as they try to take out a warlord who is set to launch old soviet era missiles at the US to end all wars and put the world at peace, the plan though is flawed as Leo has other ideas.

When Leo goes rogue, breaks the programming he has been given to go off on his own agenda, the leaders wont believe Harp, they cant they built the ultimate machine, so with the help of just a few friends and a leader or two its up to him to stop Leo from ending the world as he knows it.

The movie is an action one, lots of gunfire and people killed, explosions and some good CGI, however, we have to say they could have done better. The movie deals with the story well enough, but it does seem a bit rushed, they didnt spend any time on the background or logic to the android program, anything about how or where the new robotic soldiers, and if they hadnt spent 10 minutes at the start in setup you would be wondering why this would all be allowed to happen.

In a covid world it is good to see that netflix is making movies to entertain those stuck at home and that those are at least of good production quality. A blockbuster oscar winner this is not but as a time filler with some good points and an explosive emotional ending… this one wins.