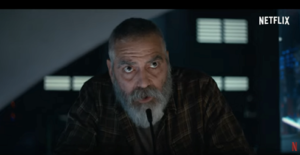 The Midnight Sky is another netflix original production, made and released during the lockdown months of 2020 so nice to see that the studio is still working best it can in these trying times.

That said what is this about, well surprising enough its another disaster movie, the earth is slowly dying, colony ships have been sent out around the galaxy to start to setup new planets for humanity to survive on. But there is a problem, the earth simply up and died whilst these ships were out, as travellers return they find nothing but desolation.

Clooney plays Augustine, a scientist, who, due to health reasons decided to stay behind at a weather and communication outpost to monitor the sky for returning travelers. He is all alone in the world it seems until that is he hears from one of the last colony ships. “Ether” the last ship is on its return journey to earth, he has to persuade them it would be best to try a new life than end up trapped on a now dead earth.

The story is of his strugle to survive long enough to contact the Ether, and for the Ethers crew to survive and get back to their new world.

Throw in a couple of plot twists of a stowaway with Augustine and glaciers falling and you have a not too bad movie.

The effects are OK, although you can see the greenscreen allot of the time, the story is not too bad although we get at this point the earth is doomed do we really need to keep making disaster movies about it. All in all goodish acting and story lead to a nice way to while away an hour or two. The only thing i would say, and this is just opinion, this movie is way way too long for what it needs. They try to make it moody and thoughtful its just boring in parts.